Holidays - Dogs and The Grinch

Keeping your dogs safe during the Holidays

Now that Thanksgiving is over people are turning their attention to the upcoming holidays. I thought an article about how to keep your dogs, especially the young ones, safe during the holidays might be helpful at this time of the year.

There are 3 Things to be aware of…

The first is food.

As you decorate one of the things that you might be doing is placing bowls of treats around your home. Many holiday goodies are poisonous to dogs. Anything with caffeine needs to be kept away from your dogs. Things like chocolate and anything else with coffee (caffeine) are dangerous for dogs.

Also many candies these days have artificial sweeteners in them, Xylitol, which is found in many candies as well as gum is toxic to dogs. So be very careful with with any candies that you might put out. Sugar is fine but no Xylitol.

Nuts are another common item that are put out for snacking on. Most nuts are fine, however,  Macadamia nuts, Walnuts and since these many times go together, Raisins are also toxic.

The second thing are certain plants

There is a wide misconception that Poinsettias are poison, they are not. They can cause slight skin irritation but otherwise they are fine. So go crazy with the Poinsettias.

However, the following is a list of very common plants that we use doing the holidays are quite toxic for dogs.

Each of these plants are very dangerous to dogs. Be sure to keep these out of the reach of your four legged friends. Be especially aware of your dogs behavior during the holidays. If you observe anything out of the ordinary, throwing up, acting drugged or sleepy. Respiration can be another sign of distress. If you think that your dog might have ingested any of these things, call your Vet. Do your best to determine what it might have been but call the Vet. Mistletoe will kill your dog, don’t wait. 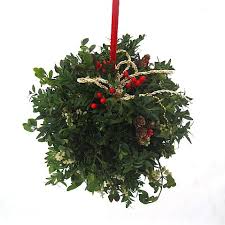 If you happen to catch your dog in the act of eating any of these things, try to figure out how much he or she consumed and then get your dog to vomit as quickly as possible. Hydrogen Peroxide works very well, it will not hurt your dog, it is cheap, I always have it on hand. It is given orally and the general dosage is one CC ( ml.) per pound but do not give more than 40 CC’s total regardless of how big the dog is. If you live in an area where you can get a syringe, any feed store that caters to cattle should have syringes. Otherwise a turkey baster works ok too just don’t give too much.

Here is a link to some additional information on using Hydrogen Peroxide to make a dog vomit.

I just went through this about 2 years ago. I was renting a house and was gone for a few weeks.  I asked my landlord to check on the house while I was gone. While she was there she placed mouse/rat poison blocks out around my house. She didn’t tell me, and don’t ask me why, she has dogs and she knew I had my dog. Anyway, I get home with the dogs and go in the house and I barely get my bag on the floor and I see Roz, my current Lab chowing down on some green thing. My dogs don’t get a lot of treats, and they don’t get anything like this. It kind of looked like one of the dental chews. So I grab this thing out of his mouth and I quickly start looking around and I found another one. So I’m like oh $?&#!!!

I could tell that it was some kind of poison bait but the little green block didn’t have any kind of information other than “Keep away from domestic animals” I immediately called my landlady, and though she could not tell me what exactly the product was she told me where it was on the shelf at the hardware store.

I grabbed a syringe and the Hydrogen Peroxide and squirted about 10 CC’s down his throat. Fortunately he was very cooperative and puked up everything he had in his stomach within about 10 minutes. 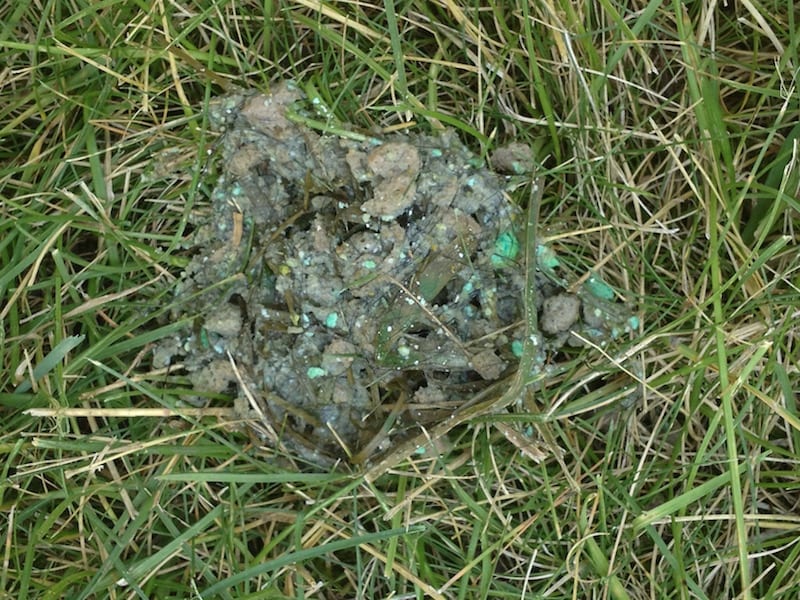 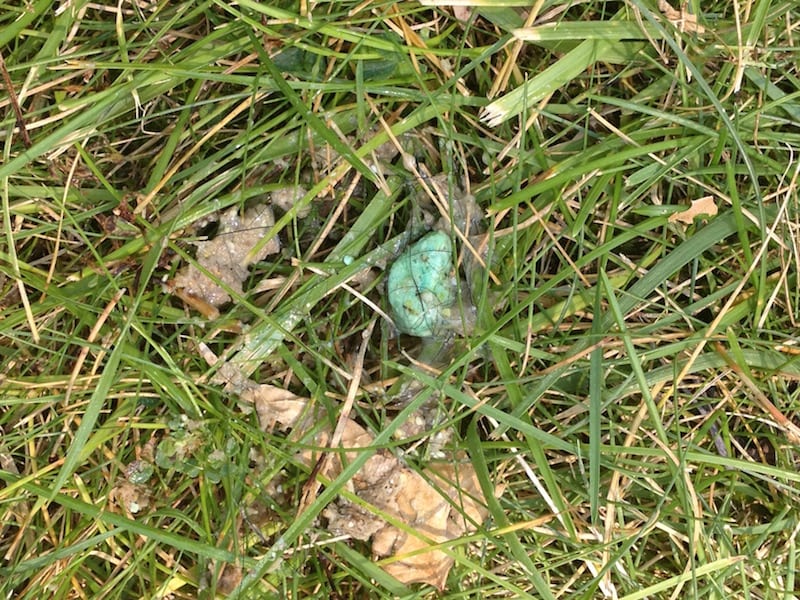 I know they are not pretty but you can see the green pieces in the pictures.

Once we got finished getting this stuff out of his stomach we headed for the vet. I just happened to have to go past the offending hardware store so I stopped so I could see what poison I was dealing with. I was figuring it would be one of the anti-coagulant but no, it was Bromethalin.

I know they are not pretty but you can see the green pieces in the pictures.

Once we got finished getting this stuff out of his stomach we headed for the vet. I just happened to have to go past the offending hardware store so I stopped so I could see what poison I was dealing with. I was figuring it would be one of the anti-coagulant but no, it was Bromethalin.

There are no tests to diagnose Bromethalin poisoning in pets. The signs of poisoning include include severe muscle tremors, fits, extreme sensitivity to being touched, seizures that appear to be caused by light or noise. However, the symptoms can be delayed for several days. There is no antidote for Bromethalin.

Sorry, I digressed, however, my point here is that you have to be prepared. If I had not had the Hydrogen Peroxide, I very well could have lost my boy.

Here is the list of symptoms to look for in a dog that has eaten Mistletoe.

Not a lot of difference in the end…… Please be prepared for the holidays, really for every day of the year.

Lastly as far as food I think it goes without saying no alcoholic beverages for the dogs.

The last thing we need to be aware of are the decorations themselves.

While you are stringing the lights and setting up the tree one thing to watch for is where you run the electric cords. This is not as much a problem with the older dogs unless you have one that really likes to chew. However, for puppies electric cords are very enticing. And those little puppy teeth can go right through those rubber cords. Electrocution is not pretty, so be careful with the cords.

Then we have the tree. I have seen more than one Christmas tree pulled over by a dog. With all those pretty ornaments and candy canes etc., the tree is a puppies dream. Don’t leave a puppy alone with your tree even for a second. If you have raised children through the terrible two’s then you understand, when I say things can happen in the blink of an eye. This is just one of the reasons that I prefer people not get puppies during the holiday season, but that is a subject for a different post. Don’t shuffle your puppy off to solitary confinement – but at the same time be careful where your pup goes.

Dogs and Holidays can co-exist quite nicely

All it takes is a little preplanning and common sense and you, your family and your dogs can enjoy a fun and safe holiday season.

I have been around dogs since the day I was born. I am better at talking about dogs than I am about myself but here we go. My parents were dog people, I grew up with a couple Boxers named Bo and King.